Approximately 1,400 people gathered for an anti-Palin rally in Anchorage on September 13 - this was the first time Palin returned to Alaska following the announcement by McCain that she was his VP pick.

Photos from the rally: 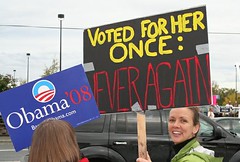 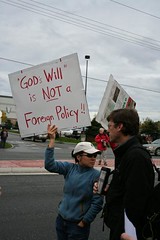 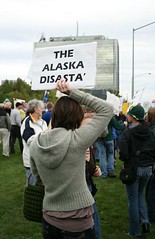 According to USA Today:

The protest came about two hours after Palin delivered a rousing speech at Anchorage's new convention center before leaving the state to return to the campaign trail. Palin was named John McCain's running mate on Aug. 29. This was her first return since then to her home state.

"I think America does not understand how absolutely extreme her positions are — even to the right of George Bush and John McCain," Barbara Norton, a 56-year-old midwife said. "She is frightening."

I can't believe I neglected to post this before. This aired on Wednesday, September 24th.

Excerpt:
COURIC: You've said,..."John McCain will reform the way Wall Street does business."...[C]an you give us any more example of his leading the charge for more oversight?
PALIN: I think that the example that you just cited...that's paramount. That's more than a heck of a lot of other senators and representatives did for us.
C: But he's been in Congress for 26 years. He's been chairman of the powerful Commerce Committee. And he has almost always sided with less regulation, not more.
P: He's also known as the maverick though....
C: But can you give me any other concrete examples?...
P: I can give you examples...that [he] has shown his foresight, his pragmatism, and his leadership abilities...
C: I'm just going to ask you one more time...Specific examples...of pushing for more regulation.
P: I'll try to find you some and I'll bring them to ya.

McCain blew off Letterman due to "the economy exploding" and because his second in command can't step up in his place while he dashes off to D.C.

However, he didn't actually dash off to D.C. (as you may have heard) instead he dashed over to do an interview with Katie Couric to try and clean up the mess that Sarah Palin left there...

Highlights of that night on Letterman:

Best quotes:
Letterman: "This doesn't smell right. This is not the way a tested hero behaves. Somebody's putting something in his Metamucil."

McCain lied to Letterman. He said he couldn’t appear on the show because he had to race to Washington to help shepherd the solution to the greatest economic crises America has faced since the Pilgrims traded in beaver pelts. Instead, Letterman’s crew found Lyin’ John, frozen stiff in a chair as he waited for Katie Couric to question him with empty, rhetorical boilerplate.

One floor down in New York City when he was supposed to be drag racing to Washington to save the nation from ruin, as only a disabled, 72 year old, functionally befuddled senior citizen can. You don’t lie to Letterman when he’s got all the cameras and crew to take you to the scrap yard and crush what’s left of your pathetic credibility.