Suffrage -- It sounds horrible, doesn't it? The word, I mean.  Like someone suffering.  And why would anyone want to fight for that?

But, according to Webster, suffrage actually means = "A vote given in deciding a controverted question, or in the choice of a man for an office or trust; the formal expression of an opinion; assent; vote."

According to this guy's blog, it comes from Latin “Suffragari”, meaning to support or vote for someone.  The word used to mean "assistance or help" and was often used by "the Church" to refer to saying prayers for the souls of the departed.   It referred to the privilege, once dead, of being prayed for (because not everyone was so special to receive these after-death prayers).

McCain has referred to Palin as the answer to women's struggle for suffrage since the 19th century at the national level (and before, at a state level).  Palin represents NOTHING these brave female suffragists worked for.  McCain could have selected a more qualified female candidate, but he did not - instead he put HIMSELF before this Country, and chose someone ill prepared to run our country should something happen to him.  These are the kind of poor and selfish decisions we can expect him to make in office as well. 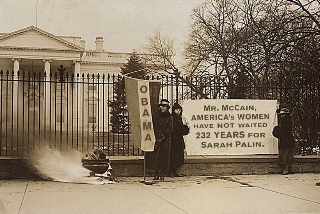 Yet another Republican trying to *scare* people into turning against Obama.

What kind of message does that send? To these kids & to the country?

Coverage of this story on Fox (of all places):

GROSSE POINTE FARMS, Mich. — A suburban Detroit woman has decided to scare up the vote among neighborhood children by just offering treats to John McCain supporters.

Shirley Nagel of Grosse Pointe Farms, Mich., handed out candy Friday only to those who shared her support for the Republican presidential candidate and his running mate Sarah Palin. Others were turned away empty-handed.

When asked about children who were turned away empty-handed and crying, she said: "Oh well. Everybody has a choice."

I wonder if that woman really thought she was going to "win over" some votes for McCain via these tactics... I mean, did she really think this was a good idea?